This year Halloween got the short end of the stick, at least on the East Coast. Hurricane Sandy came barreling through knocking out power, destroying homes and shorelines, and disrupting my favorite damn holiday. This post was originally meant to be done before Halloween, but circumstances dictated otherwise. I feel a certain lack of closure for October, so pretend it’s Halloween and scare the living daylights out of yourself with some better-late-than-never guide to the scariest places on the internet. And remember: lights off, sound on.

After asking “what is the scariest/creepiest thing you’ve seen online,” and dredging through some of the less-than-pleasant depths of the internet (thanks for all your horrifying suggestions), I put together the list of the top 5 ways to scare yourself silly on the internet.

And please note, none of the shock/gore/not-safe-for-life suggestions made this list. I wanted it to be more scary/creepy, and somewhat safe for all ages (but for real, don’t show this stuff to your kids). 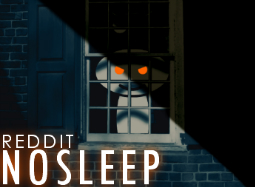 Let’s start off with some good old fashion scary stories. Only instead of telling them around a campfire with friends, we’ll be reading them on the internet with complete strangers. Reddit’s /r/nosleep community’s slogan is “because you weren’t planning on sleeping anyway,” and ain’t it the truth. Over 100,000 users subscribe and contribute to the community which is entirely dedicated to scaring the crap out of each other with original scary stories. No photos, no video, just text posts recounting terrifying encounters and first person accounts. To keep this from quickly devolving into a “hey that can’t be true” debate on every thread, r/nosleep is pleasingly specific on how to post and discuss stories, saying “Your story should be believable within reason… Remember, everything is true on NoSleep.” Read alone with all the lights off; there is no other way.

Double the Creepy
Although NoSleep is king, /r/creepy and /r/creepypasta are good if you like a scare and can deal with the truly scary site design of Reddit. (I kid, I kid!)

Screamers are the horror junkfood of the internet. They’re good for a quick, panic inducing scare, but that’s about it. “Screamers” are defined by UrbanDictionary as “A YouTube video or a Flash game used as a practical joke to try and scare the viewer or the player abruptly.” These aren’t so much for you to view as much as “sharing” them with unsuspecting friends. Below are two classic screamers that might give you a mini heart attack, even if you’ve seen them before. And remember to put your sound up!

This one is a manga-style depiction of an urban legend in South Korea. The story goes that the ghost of a distraught mother who committed suicide wanders around a district of Seoul (the Bongcheon district, not the Gangnam district) looking for her dead child. A teenager walking home encounters her and well… I’ll let you read the story and see for yourself. Click and scroll down to read.

In September 2010, a user made a long series of posts on 4chan’s /x/ paranormal forums, claiming he had acquired a haunted version of Majora’s Mask for Nintendo 64. He posts videos and testimony of the haunting as it happens, telling of a “Ben” that previously owned the game who drowned. This first hand account is straight up scary, especially since it’s backed up by video of everything happening, and especially if you’ve played Majora’s Mask. It’s long, but completely worth it. The link below goes to a creeppasta site, and not to the original 4chan post (because the original post is gone, and because I don’t want to send any innocent souls to 4chan). Also is the first video in to get your heart pumping.

This is what I consider one of the scariest web series on YouTube, and certainly the best depiction of the Slenderman urban legend. The myth of the Slenderman dates back to 2009, where a series of photos were posted to a paranormal picture thread on SomethingAwful.com. The legend took off and immediately inspired Slenderman art, creepypastas, and eventually the Marble Hornets vidoes. You can read more about the history and other instances of Slenderman here

The creator of Marble Hornets claims that “The following clips are raw footage excerpts from Alex Kralie. A college friend of mine.” The creator then goes on to say that Alex was making a film called Marble Hornets, but that something halted to production of the film, and began haunting Alex. When Alex said he was going to burn the footage, the creator persuaded him not to, offering to take it from him. Years passed, Alex moved away and was never heard from again, and the footage eventually made it’s way to YouTube. You can watch the introduction below with an explanation of the series. And don’t worry, there’s no scary things in this video, just the back story. The series starts of slow, but picks up in creepiness quickly, and new videos are still being posted about once every month.

*Bonus: Drink Yourself Silly Too

I hope you enjoyed my little list. If you need a stiff drink after seeing the horrors of the internet, I have just the thing: How to Make Skittle Vodka. Here’s the how-to video I posted from last year. Enjoy and don’t forget to share this post on Facebook and Twitter using the buttons up at the top!

Who is The Social Media Chef?

Hi, I'm Preston Porter, also known as the Social Media Chef. Using my background in writing, my lifelong love for new media, and my experience in marketing, I cook up winning strategies and bring a little of my own flavor to the world of social media.